The Trojan Phlyers own and operate two T-28B aircraft. Both aircraft have Wright Cyclone R1820-86B nine-cylinder radial engines rated at 1425 horsepower. The fully aerobatic aircraft can takeoff in less than 800 feet of runway, climb to 10,000 feet in less than 90 seconds, race level above 335 MPH, and dive faster than 380 MPH. In fact, the T28 can outperform most World War II fighters at low altitude.

Both of the Trojan Phlyers’ aircraft were used by the US Navy as primary flight trainers. These aircraft were used to teach Navy and Marine aviators basic transition, formation, aerobatics, and instrument procedures and techniques.

Aircraft #26, Bu# 140047 with USMC markings, was built by the North American Aircraft Company in 1954 at Columbus, Ohio. The aircraft was accepted into service with the U.S. Navy on 22 February 1956. It spent 1958-1960 at NAF Litchfield Park (FFT) VR(F)31, then in April 1960 it went to VT-3, the “Red Knights” at NAAS Whiting (South Field). In August of 1963 the aircraft was assigned to NABTC at NAAS Saufly Field, then it returned to VT-3 in April 1966. In June of 1970, the aircraft was assigned to MCAS New River, but in May 1974 it returned once again to VT-3 at NAS Whiting where it flew until December 1976 when it was transferred to Training Wing 5 at NAS Pensacola. The aircraft was subsequently sent to VT-6 “Shooters” in January 1980 where it remained until February 1983 when it was retired to the Military Aircraft Storage and Disposition Center at David- Monthan AFB, Arizona. The aircraft was stricken from service on 24 February 1983 after serving 27 years and 2 days with the U.S. Navy.

This aircraft came to the Trojan Phlyers in 1999, and now has over 16,000 hours of flight time. Today, this aircraft flies as the wing aircraft of the formation pair since it is the lightest aircraft with the quickest response and highest roll rate.

Our aircraft, Bu# 138164, with the number “27” painted on the cowl and with “USAF” markings, was built by the North American Aviation Company in 1953 at Downey, California. The aircraft was accepted into Navy service on 9 November 1954 and stricken from Navy lists in January 1984 after some 29 plus years of military duty.

During its years of military service, this aircraft served with Attack Squadron 122 (VA-122) “Flying Eagles” at NAS Lemoore, California from June 1968 until February 1969. Then the aircraft flew at NAS Whiting Field, Florida with the “Red Knights” of TRARON 3 from August 1969 until April 1972, and then with the “Shooters” of TRARON 6 from September 1973 until November 1976. In December 1976 the plane was transferred to COMTRAWING 5 at NAS Pensacola, Florida. In June 1978 the T-28 moved to its final duty station, NAS Corpus Christi, Texas, where it flew with TRARON 27 “Boomers” until it retired from service in January 1984. The aircraft retired to the Military Aircraft Storage and Disposition Center (MASDC) at Davis-Monthan AFB, Arizona.

The aircraft was purchased by a private individual and restored to flying condition, and subsequently sold to the Trojan Phlyers Corporation in 2000. This aircraft is the heaviest and most stable of the two Trojan Phlyers’ aircraft, therefore it is normally used as the lead aircraft in the formation demonstration. 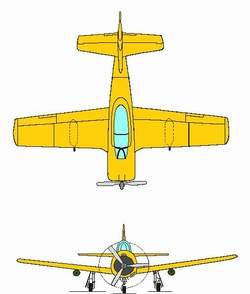 Immediately following World War II, the Department of Defense tapped into the expertise of the North American Aviation Company to develop the next generation, high-performance, advanced primary flight trainer to serve as a successor to the T-6 Texan, also built by North American Aviation. The result was the T-28 series of aircraft.

The U.S. Navy was so impressed with the rugged Trojan that in 1952, the Navy contracted North American Aviation to build an improved version of the Trojan for Navy primary flight training. That improved version of the Trojan turned out to be the T-28B with a more powerful Wright Cyclone R-1820 engine with 1425 horsepower and a three-bladed propeller.

In addition to the “B” model, the T-28C was built for the Navy starting in 1955. The “C” model was equipped with a smaller diameter propeller and a tail hook to allow aircraft carrier landings. The Navy flew a total of 489 “B” models and 299 “C” models for primary flight training and initial carrier qualifications. The service continued to use the aircraft until 1984. 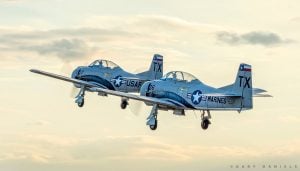 In 1959, several hundred surplus “A” models were shipped to France where they were modified by Sid Aviation for the French Air Force. The French modifications included a bigger engine, structural improvements, and armament capabilities resulting in what is commonly known as the T-28S (Sud), T28F, or just the Fennec. After success in the counterinsurgency role in Algeria in the early sixties, these 245 Fennec aircraft continued to serve France for many years.

In 1962, North American began supplying a different model of the T28 – the T28D—to the U.S. military for combat in Southeast Asia. The T-28D had six underling hardpoints able to accept a variety of weapons from gun pods and rockets to napalm and 500-pound bombs. The 385 “D” model aircraft were used extensively throughout the war zone, including the USAF “Raven” Forward Air Controllers in Laos.

Altogether, North American produced over 2000 T28’s that were used by some 24 different countries around the world. Of those 2000 aircraft built, there are about 400 still flying worldwide.